As part of an ongoing collaboration with the Pacific Northwest College of Art, in February Gallery 114 hosts a show of MFA candidates entitled “Four.”  Four PNCA graduate students present paintings, prints, and installation work in a show curated by Maximiliano Martinez, MFA candidate in visual studies.  “Four” runs February 2 through February 25, with a First Thursday opening reception for the artists February 2, 6-9 pm.  Regular gallery hours are noon to 6 pm Thursday through Sunday.

Gallery 114 artist Jeff Leake organized the first PNCA exhibit last year of Print Media students and coordinated this year’s show as well.  Maximiliano Martinez, who curates the show, is one of his former students.

“Four” features the work of Carla G. Javier-Brea, Aruni Dharmakirthi, Melanie Stevens, and Angelica Maria Millan Lozano.  The exhibit is about roots and rootlessness, leaving and arriving, says curator Martinez. “It’s about the people we love, it’s about the hands we grew up holding, it’s about story, it’s about who has been telling story, . . it’s about our myths.”

Carla G. Javier-Brea is studying for an MFA in Print Media.  She spent many years traveling and living in the Dominican Republic, where her parents were born.  While living in the Dominican Republic she pursued a career in Advertising and Visual Communication at the Universidad Ibero-Americana.  There she first encountered analog photography and explored developing and printing her own film.  These pursuits led her to explore all parts of her island, seeking subject matter, engaging strangers in conversation and then snapping their portraits. Much of her work reflects her roots in the Dominican Republic, its mythology and folklore.  She describes her art as an exploration of self, her multi-cultural background, family mythology and traditions, superstitions and childhood memories.

Aruni Dharmakirthi is a Sri Lankan artist based in Portland, who earned a BA in Studio Art and Art History from Florida State University and is completing an MFA in Visual Studies. Aruni is co-founder and curator at SoftSpacepdx, a video+new media project space that creates a platform for emerging artists. Aruni’s work uses digital animation and fibers to create installations that move back and forth in time, exploring known and untold histories. The political and the personal come together to recall the journey of migration, connecting it to the tragedies of colonization and the continued violence of imperialism. These histories are re-imagined into digital culture, blurring the lines between contemporary and traditional, eastern and western.

Melanie Stevens is an artist, illustrator, and writer from Atlanta, Georgia.  She received her BA in Political Science from Yale University in 2001 and created the graphic novel, Black Picket Fences.  She is also co-founder and editor of Miss Anthology, an organization that supports racially and economically diverse young, female comic artists through hands-on training in workshops and publishing online and in print.  Stevens creates public installations and interactions that examine the experiences of people of color, and what she calls “the unspoken and hidden perceptions and power dynamics wielded against them.  I challenge audiences,” claims Stevens, “by presenting work that mimics the constructs of psychological implications of access and privilege.”

Angelica Maria Millan Lozano is a fiber and performance artist from Bogota, Colombia, who moved to Portland to work on an MFA in Visual Studies.  Her work questions the ethical implications of social injustices that affect Latinas in the home.  She creates abstract and figurative compositions on distressed fabrics, juxtaposing various remnants that symbolize her experiences of Colombian and American cultures. 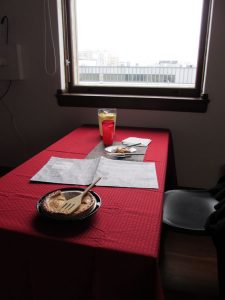 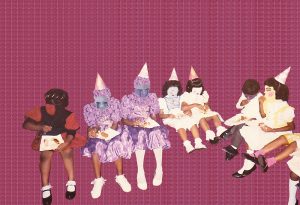 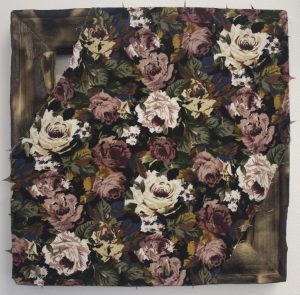 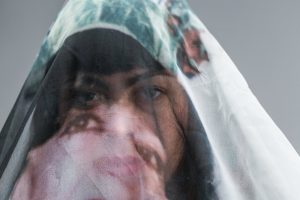